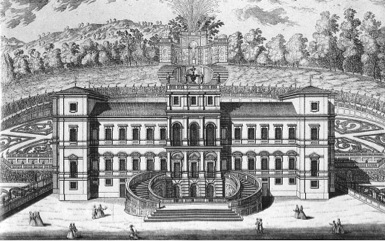 The complex of vineyards and gardens was built in the early seventeenth centuryon the hill of Turin based on the model of Roman villas by Prince Cardinal Maurizio of Savoy, son of Duke Carlo Emanuele I (documentation to 1615, 1618 to 1619). In 1657 his wife Ludovica expanded the buildings and gardens, updating decor and furnishings. In 1692 the vineyard went to Anna d’Orleans, wife of Vittorio Amedeo II, who has done, in what is now called Villa della Regina, important interventions.
First under the guidance of Filippo Juvarra, and then Giovanni Pietro Baroni Tavigliano, spaces and relationships with the garden were redefined. The furnitures and decorations from the seventeenth century (D. P. Somasso Seyter and team)were renovated with the involvement of all great artists who worked on the construction of the royal capital of the kingdom (GB Crosato and C. Giaquinto, G. Dallamano). The unity of the complex, reached through a delicate balance between the vineyard, the villa with the noble pavilions, the caves, the water games in the gardens  and the service areas assigned to the agricultural works, was maintained  even after the villa became  the Institute for the Daughters of Military Personnel in 1868 (institution abolished in 1975). The failure to keep this perfect communion of the different elements of the Villa was followed by a gradual abandonment: partial dismemberment, war damage and improper interventions led, in the twentieth century, to a complete degradation near the collapse.

The Superintendence for the Historical, Anthropological Heritage of Piedmont was entrusted in 1994 with the restoration of the compound.
Thanks to State, institutions and private funds , they achieved to restore the close connection between the complex of Queen’s Villa and the City, bringing back the scenographic backdrop of Turin, beyond the river Po.

The difficult work of restoration done by the Superintendence for the Historical, Anthropological Heritage of Piedmont brought one of Turin wonders back to life.